The Evolution of the Non-surgical Body Contouring Industry

For those of us wanting to lose weight, the non-invasive body contouring industry can be super.

Stubborn subcutaneous fat is very tricky to move with exercise and diet alone!

However as with most industries within beauty and weightloss, the buyer must beware in terms of safety and efficiency.

People finding it hard to lose weight on their own and women that suffer from cellulite may not always be aware of what is available, this is a great way to assess your options.

When ultrasound cavitation was first introduced, it was an exciting thing!

People could go to their Doctor or Beautician and have their fat destroyed.

The ultrasound technique used for fat removal, heats the water in the fat cells (with the power of sound) until it boils and they burst.

But later they found out, the forcefully destroyed fat was not leaving the body, but gathering in the liver, creating energy level issues, causing weight gain in later years in different areas, and that ultrasound cavitation seemed to make cellulite worse. Ultrasound cavitation is from 20 kHz-1MHz. And they also found out that the heat reaction from ultrasound 1MHz-3MHz was stronger and went further than originally thought.

The above technology is now relatively very cheap and is still being used in treatments today. Especially in emerging markets, such as Norway.

Many companies that used ultrasound technology for weight loss, now offer you new technology, and who is to say that these also won’t turn out to also have negative repercussions?

Other alternative treatments focusing on destroying the fat cells are still being used today, and there are others which could turn out to damage the fat cells.

Even with the recent understanding of how valuable fat cells are to our endocrine systems! And the risks of non-alcoholic fatty liver disease. 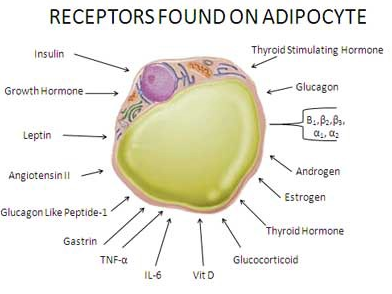 Electroporation, which replaced mesotherapy for weight loss (injections into fat cells), increases the permeability of the fat cell and forces the serum directly through the cell walls. It cannot be used without a serum. There has been controversy over some of the ingredients in the serums used. Certain soy derivative products for example, are banned for use in injections in some countries. Yet there is not enough of an understanding of how electroporation also delivers the product directly into the cell, and so we find that the same ingredients are in electroporation serums.

Hot laser has many uses in the beauty industry, when it is used for weight loss it works to heat and destroy the fat cell, the kind of laser determines how the energy is absorbed by the skin and the practitioner is important as to whether there is a risk of burns.

Cryolipolysis works to freeze and destroy the fat cell. There are different methods and some can be a painful procedure and could leave uneven weightloss or the risk of hard lumps.

Radio frequency RF, like ultrasound, is able to heat internally without the skin necessarily taking the heat. However there is still a risk of external burns. The energy field of 30 KHz and 300 MHz is radio frequency. The rise of temperature and the heating depth depend on the level of energy used and on the impedance of biological tissues (the differing resistance from the client).

There are different kinds of radio frequency when it comes to body contouring:

High frequency, at a very high heat which heats and destroys the fat cells.

Or there is the attempt to target not the destruction of the fat cell, but instead to heat the collagen tissue.

Fat cells have been determined to be very susceptible to damage from focused heat.

Monopolar RF needs to go right through the body from the hand-piece to get to the grounding part, and takes the heat deep into the skin, the energy reduces as it leaves the body towards the passive part.

The other method of bipolar/tripolar/multipolar RF has energy sent through to the body but then returns into the same device piece, in recent applications vacuum or endo-massage is being used concurrently to enable this energy to go further into the tissue.

There is not so much investigation into the effects on the areas the energy leaves the body through, which is surprising, given the recent advancement in ability to study the lymphatic system and the fluid surrounding the cells.

Some countries such as Italy have tried to put in place consumer safety measures and place regulations that limit the depth of penetration of RF, the introduction of multiple methods into one device makes this harder to police though. ‘European made’ products can also still mostly be manufactured outside of Europe, leaving only the final assembly happening in Italy.

As with ultrasound cavitation, the risks of killing fat cells or damaging the endocrine system were not realised until 2-3 years afterwards, as people started to put the weight on in different areas or faced issues with their energy levels.

So with these methods, we are waiting to see if there will be repercussions, or new studies coming out.

Customers concerned about retaining their fat cells during this body contouring process can still be misled though, especially when technology is bundled together, and the focus is placed on the safest, most proven component of the technology.

As a sad indication of societal pressure though, most people seeking weightloss are not so concerned about the side effects or are very eager to believe what the retailers say.

Luckily though the Erchonia Corporation have not entered into any of the above technologies and instead have focused on perfecting Low Level Laser Technology (LLLT) or cold laser.

This approach is quite different in the non-invasive body contouring industry, because it works with the body’s own processes, whilst reducing inflammation.

Originally, they started with a pain-free, cold, red laser, and it was to be used as an external procedure before liposuction (which made liposuction more effective and less painful), before being used on its own.

Then they switched to the green laser frequency of 532nm, due to it being more efficient. 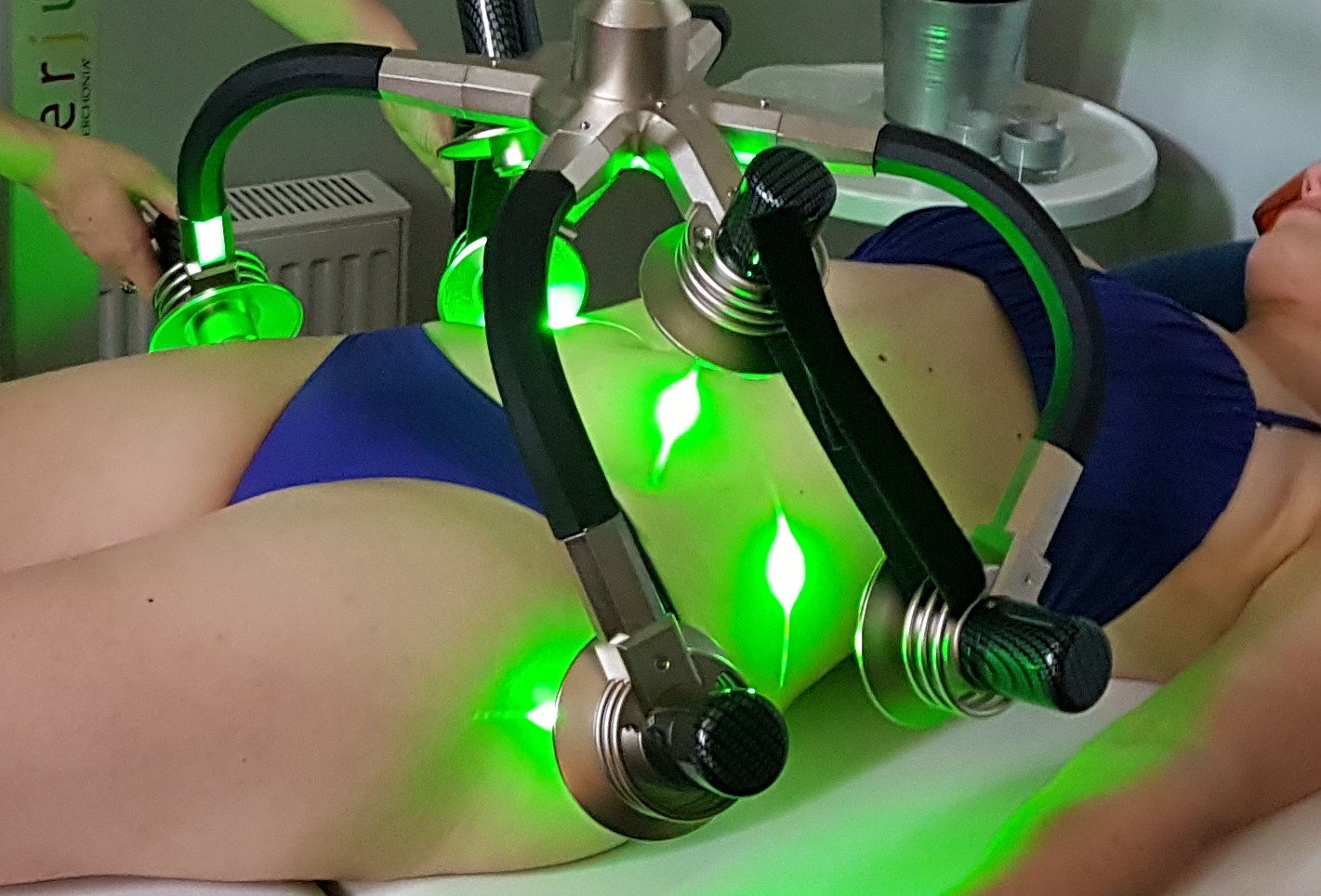 The fat cells have receptors which receive the light/photon energy, the light gets the fat cell to start emptying and behaving optimally in terms of which biochemical signals it sends out. It resets the fat cells without any damage to the cells or tissues.

(That is why it is important to come to your appointments with clean, dry skin so the light can reach the receptors.)

There is absolutely no damage and repair cycle performed by the body, it encourages collagen growth and repair to the connective tissue through stimulating stem cells.

There are also improvements in our client’s readings of bad cholesterol and lipids in their bloods!

It cannot reach the important brown fat layer that has only recently been found to still be with us as adults; distributed in unpredictable places!

Next after the laser treatments, your body may need some help to be able to process the release of the inner fatty matter.

We have developed a programme alongside the Green laser, to help to speed up the elimination process. It is along the lines of an easy detoxification process which has other health benefits, and we invite you to visit us for a free consultation to find out if body contouring is right for you.

With our body contouring technology and focus on the importance of a healthy lymphatic system, gut and liver: We give people the kickstart they need in their weight loss programme. We also give them the ability to take off those last kilos and shape their body.

Most importantly results which do not affect their system negatively in the long run.

This website uses cookies to improve your experience while you navigate through the website. Out of these cookies, the cookies that are categorized as necessary are stored on your browser as they are essential for the working of basic functionalities of the website. We also use third-party cookies that help us analyze and understand how you use this website. These cookies will be stored in your browser only with your consent. You also have the option to opt-out of these cookies. But opting out of some of these cookies may have an effect on your browsing experience.
Necessary Always Enabled
Necessary cookies are absolutely essential for the website to function properly. This category only includes cookies that ensures basic functionalities and security features of the website. These cookies do not store any personal information.
Non-necessary
Any cookies that may not be particularly necessary for the website to function and is used specifically to collect user personal data via analytics, ads, other embedded contents are termed as non-necessary cookies. It is mandatory to procure user consent prior to running these cookies on your website.
SAVE & ACCEPT